Skip to content
HomeFAQWhat are the products specification?What about the mean reference period?

The altimeter remote sensing measurement gives an access to the Sea Surface Height (SSH) above the reference ellipsoid. The objective is to extract from the altimeter measurement the useful information for different applications. We consider as useful field the dynamical part of the signal, i.e; the sea surface above the Geoid or Absolute Dynamic Topography (ADT).

Unfortunately, the Geoid field still not accurately represents the small scale structures (< ~100km). This does not enable us to directly estimate the ADT by subtracting the Geoid field to the Sea Surface Height SSH measured by the altimeter. In order to access to the small wavelengths of the dynamical signal, a Mean Sea Surface (MSS) field is used. It represents the mean profile of the SSH over a defined temporal period P, also called reference period. The Sea Level Anomaly (SLA) is obtained by subtracting the MSS to the SSH. Consequently, the SLA obtained is relative to the reference period. A Mean Dynamic Topography (MDT) field can then be used in order to retrieve the ADT. It represents the mean sea surface above the Geoid. The ADT and the SSH are independent from the reference period.

The DUACS products are referenced to a 20-year reference corresponding to the [1993, 2012] period.

How to change the reference period ?:

A methodology is proposed by Pujol et al, 2016 (see Appendix A of the paper)

This convention explains why the DUACS global mean SLA over the reference period is different from 0. The value obtained is characteristic of the Global Mean Sea Level rise over this period. It is close to 2.7 cm as illustrated in the following figures. We can note on the figure some residual regional variations of the mean SLA over the reference period. They are induced by the imprecision of the referencement to this reference period. This imprecision is higher over high variability areas and high latitudes where the altimeter sampling is reduced. The mean SLA over another period is representative of the variations of the sea level around its mean state. It can highlight significant regional variations as illustrated in the figure (example of the mean over the [2003, 2004] period). 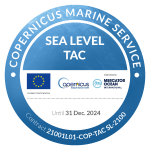